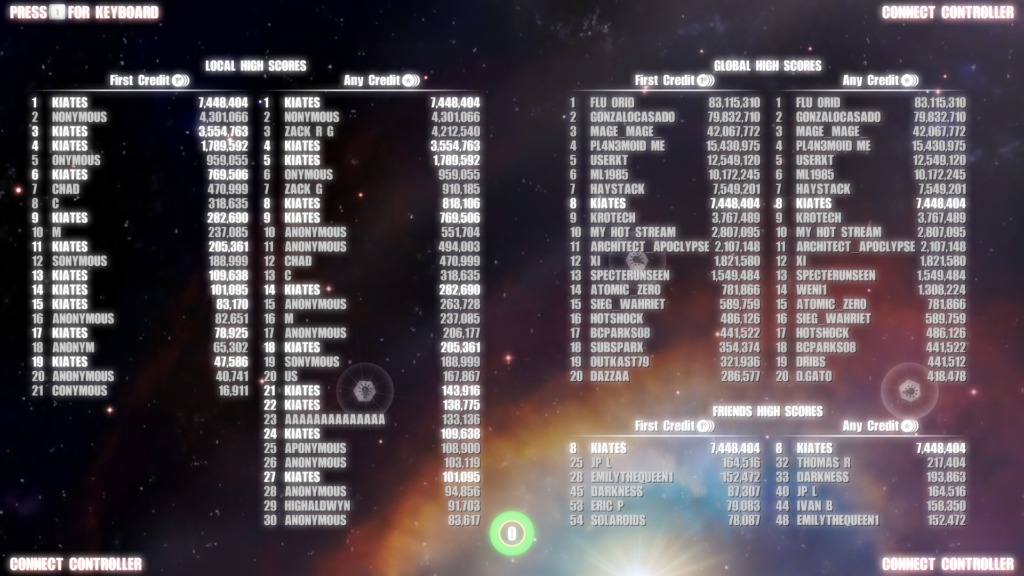 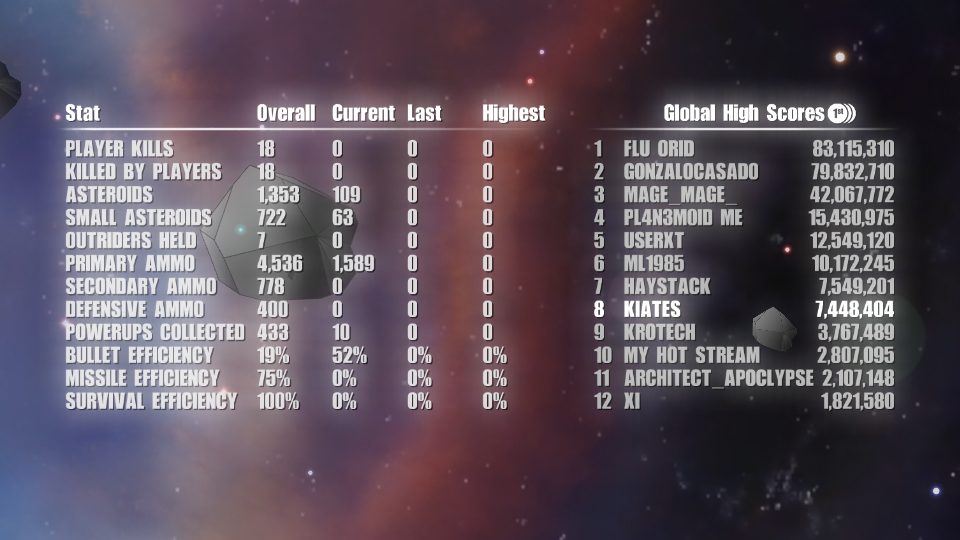 I present to you a small but significant update, as it has a few features that have been commonly requested. Now that I have an option menu in place it makes it much easier to surface some of these tweaks!

First, a very common request has been to eliminate the traditional “screen edge effect” that simulates the classic Asteroids wrapping from one side of the play area to the other. As Solaroids has a much larger playing field, this can be jarring (especially in the arena corners) and is unnecessary. So now the default is to use a Seamless Wrapping mode where there will be no discernible edge to the play area. The sun becomes a constant landmark to help re-orient yourself and is conveniently shown in the player reticle. While this is the new default, you can globally turn the mode on and off during gameplay from the video options.

Second, there are several options geared toward tweaking the visibility in the game. One is that the faster you are flying the more the camera will look ahead. This should give better visibility of what your heading towards, like a giant space centipede (Infiltrator). In addition, I’ve adjusted the default camera to be panned back just a little more, but you also can now adjust it even further (within reason) using the new Zoom video option.

Third, you may or may not have noticed that at the end of November I released a FREE DEMO, so if you can, please spread the word. The demo has a few limitations, one being you can only play for 15 minutes at a time or through level 4, whichever comes first. In addition, Free Play mode is locked, and Steam global leaderboards and achievements are unavailable. If the full game is purchased in-game, then these restrictions are lifted except for the global leaderboards and achievements. A restart is necessary to activate these Steam features.

I hope you enjoy the new additions, and I would love to hear any feedback you are willing to share via reviews or discussion threads. Thank you for your continued support, and happy blasting!!

Hello everyone!! I’m happy to announce the V1.1.0 release of Solaroids.

This is a big update (at least for me) as it is one of my milestones to finally have proper option menus to control various typical game settings as well as a few extras for tweaking the mechanics of the game. I’m planning some additional options in the future, but this definitely feels like a good base.

A few of the other gameplay tweaks that are worth highlighting are that friendly fire and friendly collisions can now be turned off. While friendly fire was a specific design choice for the game to allow a co-op (or not) experience as well as a little extra danger, it has been a top requested feature. Note that these are available from the global options menu before starting a game; they are not available from the player-centric option menu in the pause screen. Similarly, there is also now the option to globally turn Auto-fire on/off for all players. When Auto-fire is on, you can still take control of the shots to fire bursts when things get intense and you need a little extra for a moment or two. This is the default for new installs.

Another tweak is the ability to control how many “credits/continues” are allowed per game session. Previously this was unlimited, which required discipline to not continue if you wanted to compete only on the “first credit” leaderboards. I’ve defaulted this to zero for new installs, but it can be changed from the option menu.

Also, this update provides a tip system to give a little coaching here and there. There are a lot of subtle/hidden details with how things interact in the game, so along with the typical instructional material to help clarify key game elements quicker, the tip system sheds light on many of these. Not all tips are available immediately, but they present themselves the further you progress. Similar to power-up prompts, they are not available in Free Play mode, so they are only available in the normal “campaign” mode. They can also be turned off via options once you’ve mastered them.

I hope you enjoy the new additions, and I would love to here any feedback you are willing to share via reviews or discussion threads. Thank you for your continued support, and happy blasting!!

A demo is now available on Steam.

Here are the current limitations/notes for the demo:

There are a lot of small but significant changes in this update. Of special note is that you should find the early level progression quicker and with more to do than just mine asteroids for ammo/power-ups.

Just a small update primarily to support Steam Music! There are also a few other small features and fixes.