Space is a cold, even frigid, place and a sinister plot has been hatched by unknown forces. Working against us, an alien presence has deployed the biggest snow machine known to man, or any other-worldly inhabitant for that matter, in the hopes of sneakily invading our little corner of the galaxy. 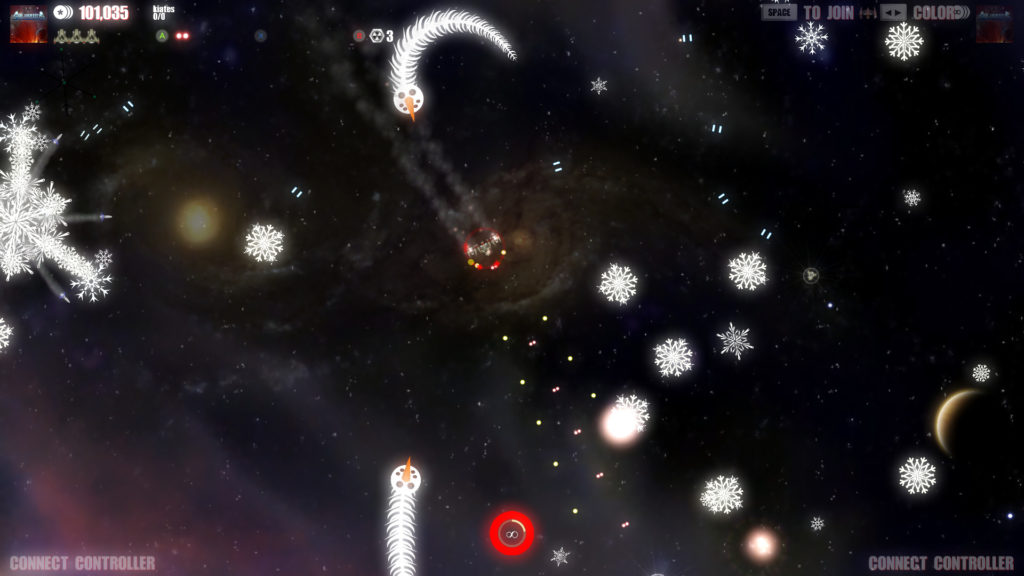 Battle the most fearsome and retaliatory snowflakes (and the slithery snowman) you’ve ever laid eyes on, in a deadly battle against what would appear on the surface as a winter wonderland.

Use your skills acquired playing… ahem… Solaroids, to defend our little home. Do you have what it takes? Do you even care enough to stand up and be counted among humanities last hope for survival?

Briefing Instructions to access the xmas game branch on Steam:

Once you have either saved mankind or screamed in agony at defeat, you can return to your normally scheduled program by returning to the BETAS tab and picking NONE – Opt out of all beta programs from the drop-down selector.

I present to you a small but significant update, as it has a few features that have been commonly requested. Now that I have an option menu in place it makes it much easier to surface some of these tweaks!

First, a very common request has been to eliminate the traditional “screen edge effect” that simulates the classic Asteroids wrapping from one side of the play area to the other. As Solaroids has a much larger playing field, this can be jarring (especially in the arena corners) and is unnecessary. So now the default is to use a Seamless Wrapping mode where there will be no discernible edge to the play area. The sun becomes a constant landmark to help re-orient yourself and is conveniently shown in the player reticle. While this is the new default, you can globally turn the mode on and off during gameplay from the video options.

Second, there are several options geared toward tweaking the visibility in the game. One is that the faster you are flying the more the camera will look ahead. This should give better visibility of what your heading towards, like a giant space centipede (Infiltrator). In addition, I’ve adjusted the default camera to be panned back just a little more, but you also can now adjust it even further (within reason) using the new Zoom video option.

Third, you may or may not have noticed that at the end of November I released a FREE DEMO, so if you can, please spread the word. The demo has a few limitations, one being you can only play for 15 minutes at a time or through level 4, whichever comes first. In addition, Free Play mode is locked, and Steam global leaderboards and achievements are unavailable. If the full game is purchased in-game, then these restrictions are lifted except for the global leaderboards and achievements. A restart is necessary to activate these Steam features.

I hope you enjoy the new additions, and I would love to hear any feedback you are willing to share via reviews or discussion threads. Thank you for your continued support, and happy blasting!!